I’m posting the Christmas cards that I made kind of late in the season (a couple of days before Christmas. I usually do this because I want to make sure that the people I originally sent the cards received them and didn’t see them ahead of time on the Internet.

I made this card using nothing but die cuts. The only stamping was the sentiment that went on the inside. The inside is not shown here.

The snowman and all of his paraphernalia and the “J” and “Y” were all cut from one MFT Die-namics set and then layered onto an A2-sized piece of cardstock. I used a Concord and 9th scalloped edge with snowflake die to create the edging at the bottom of the red cardstock base so that the final dimensions of the red card front were 3.5″ (along the vertical) x 5.5″ (along the horizontal). This card front was then mounted onto an A-2 white horizontal-oriented card base.

Note: For added detail, the snowman’s face and the “J” and “Y” were cut from white glitter cardstock. The snowman’s hat band was cut from the same red cardstock used for the card front and the scarf was die cut from MFT’s Candy Land paper pack.

This is a pretty chill snowman if I do say so myself. Happy Holidays!

Supplies used to make this project:

There is so much turmoil here and abroad that I thought I’d make a card wishing for peace in the world. By the way, I hope I don’t sound like a beauty pageant contestant by saying this! 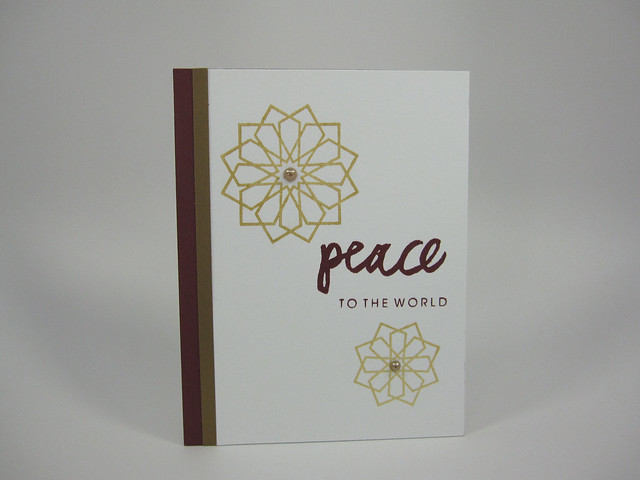 I started by stamping two geometric images from an Altenew stamp set, Dodecagram in Delicata Golden Glitz ink. This is my favorite gold ink and I try to use it whenever I want to add a bit of elegance to a card. The sentiments from Essentials by Ellen Clear Stamps, Brushstroke Christmas by Julie Ebersole were stamped in Scarlet Jewel, an ink from Papertrey ink. Small pearls from my stash were added to the center of the stamped images.

The card front was originally 4.25” x 5.5” but I realized that it looked a little bare so I trimmed it down and added 2 thin strips of cardstock in Scarlet Jewel (by PTI) and Antique Gold (Stardream Metallic cardstock) on the left side.  All of this was mounted onto an A2 top-folding card base.

The result was simple and I liked the richness of the colors in the card. I think the combination of the Scarlet Jewel (a rich burgundy-red) and the Antique Gold lend an elegant look. I love the “peace” sentiment in the brushstroke font paired with the thin block letters of “to the world”. The two fonts are a nice contrast to each other.

Today, I decided to create a Holiday card without a lot of the bold, bright colors associated with Christmas.

I love the Hero Arts stamp I used in this card. The stamp is a delicate fine-lined drawing of bare winter trees. The simple graphic style of the stamp’s image really does convey a sense of quiet and peace in the dead of winter.

I first stamped the image in gold ink onto white 80 lb. cardstock and trimmed it down a little and mounted it on gold metallic cardstock. I then centered the whole think onto wood-grained paper and mounted everything onto a top-folding A2 card base and added the die-cut brushstroke ‘Peace’ sentiment. Love this brushstroke die.

I’m pleased with the simple, minimalist layout of the card made with a minimum number of supplies The gold Delicata ink is gorgeous. The photo doesn’t do justice to this beautiful gold, shimmery ink. 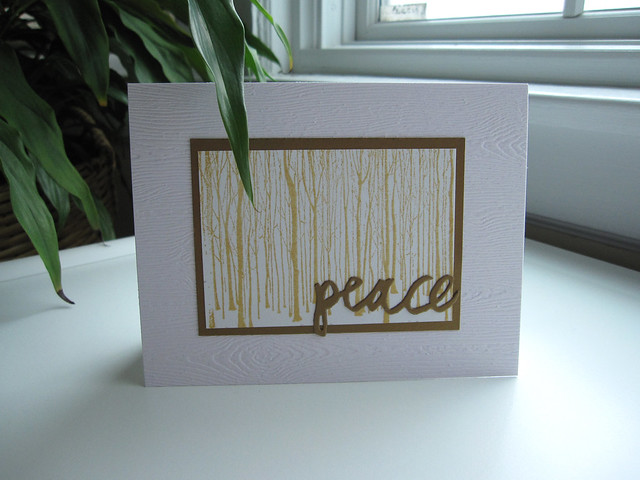 This is another card I made using stamps from the Essentials by Ellen Holiday 2014 release. I love the Santa with the shades! He’s such a cool dude. It looks like Santa took a bite out of the poor gingerbread man while sipping some hot chocolate. 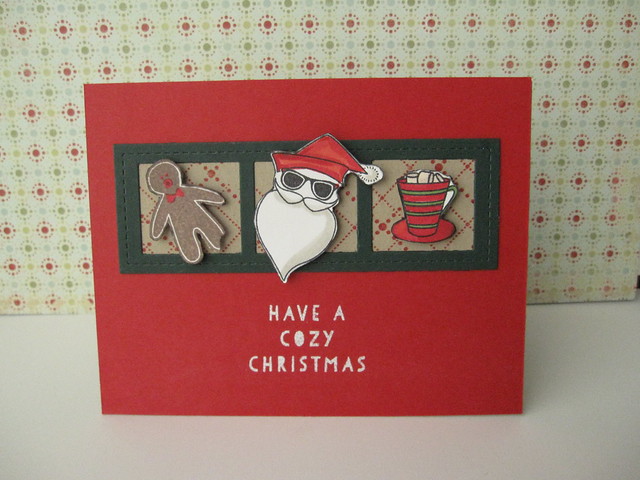 I die cut a 3-opening film strip using Pretty Pink Posh’s die and PTI’s Pinefeather cardstock. I  stamped the images onto white cardstock. The gingerbread man was stamped in Memento Rich Cocoa ink and the other 2  images in Memento Tuxedo Black ink. All images were colored using Copic makers (I only colored Mr. Gingerbread man’s eyes, mouth and bow tie in red). After coloring, I fussy-cut the images.

The backing to the 3-opening strip is a piece of kraft cardstock cut down to the same size as the strip and then stamped in red ink using the argyle-patterned background stamp.  After adhering the backing to the film strip, I mounted the fussy-cut images onto the strip using small dimensional foam dots. Then I mounted the strip onto a 4.25” x 5.5” piece of red cardstock. This entire piece was mounted onto an A2 top-folding card. The sentiment was stamped using white craft ink.

I received an early Christmas present this year! Santa gave me the entire Essentials by Ellen Holiday 2014 Release. This was the first card I made from the release. The images were designed by Julie Ebersole one my favorite cardmakers. Julie’s humor in videos always makes me laugh!

The images and dies in this release are gorgeous. I especially like the delicate lines of the ornaments, evergreen branches  and sentiment in the two sets that I used. I don’t know how to describe it but the stamps in this release have both a delicate and whimsical feel to them. Love this release and I’m going to love making Holiday cards using them. 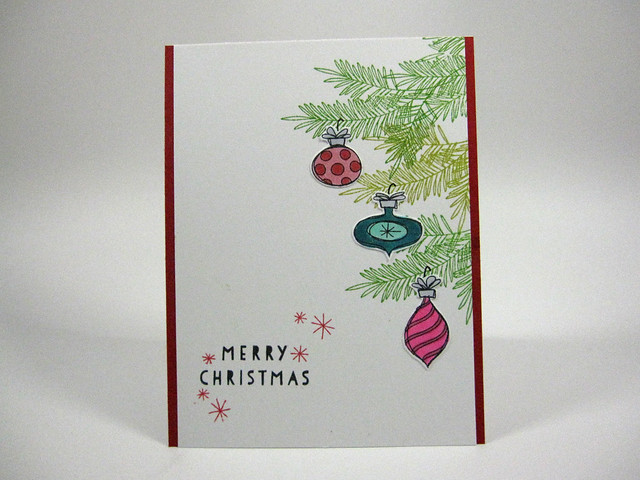 I stamped the evergreen branches in 2 shades of green to give a feeling of dimension. On a separate piece of white cardstock, I stamped the ornaments using Memento Tuxedo Black ink because I knew I was going to use Copic markers to color them. I colored the ornaments first and then fussy-cut them. The ornaments were flush-mounted onto the card and I drew small hooks using a fine-tipped black artist pen so the ornaments looked anchored to the tree. The sentiment was stamped in archival ink and I added a few sprinkle image from the stamp set in red ink to highlight the “Merry Christmas” sentiment a little bit more.

Where making and giving meet

my diary of handmade crafts and other stuff.

Fun, unusual and forgotten designations on our calendar.

Stamp Away With Me